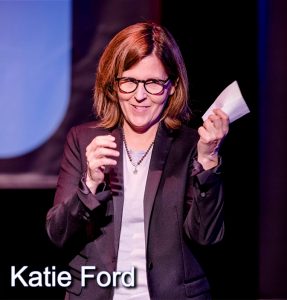 Katie Ford co-founded Ford Cassella Productions with Maggie Cassella.  Katie keeps her finger firmly on the pulse of all things entertainment and leading edge, always looking for new ways to reach out, connect, and bring story into the picture.

Originally a stand-up, Katie started as a writer on the sitcom Family Ties when she was 21, where she wrote 10 episodes over two years. More recently, Katie wrote the Emmy and Golden Globe Nominated movie Prayers For Bobby starring Sigourney Weaver and has written on Desperate Housewives, Transporter, Disney’s Little House on the Prairie and many other series. Her plays have been produced in NY and LA and featured actors like Keanu Reeves, Daryl Hannah, and Mark Ruffalo. Passionate about encouraging the next generation, recently Katie created The New Storyteller series for Loyola Marymount University in LA and currently, alongside her work on High Desert, she is studying narrative medicine and writing a book about the healing power of humor in the world of healing and recovery. 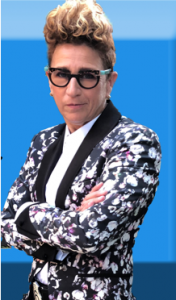 Maggie co-founded Ford Cassella with Katie Ford.  While role overlap is considerable, Maggie’s focus is next steps and driving the engine forward.

Maggie has one of those backgrounds that causes people to say “what haven’t you done”. She came out marching and as a lawyer, Maggie fought for LGBTQ rights representing people with AIDS, trans clients, and tying the test case for gay adoption in Connecticut. And all that before the mid-90s!  She was twice featured in the New York Times for her work and activism.
She started her stand up career in 1988  at the insistence of  queer comic, activist, and jazz singer Lea DeLaria. (“You’re funny you should do stand-up.”) Lea also taught Maggie the value of producing your own shows from the start.
Upon moving to Canada from the States Maggie was quickly tapped as a talking head on all things current and appeared on every major news network as a commentator and “go to” person on queer issues as well as the American political scene.
She also began live-event producing in Toronto in 1994 with the NAFTA Cabaret pairing queers from the US and Canada in regular shows. In 1997 she founded We’re Funny That Way the first queer comedy/cabaret festival showcasing queer talent known and unknown.
Maggie executive produced, produced and hosted We’re Funny That Way TV specials for the Comedy Network, OUTTV, and most recently for CBC gardening four Canadian Screen Award Nominations and one win for BEST PERFORMING ARTS SPECIAL.
Maggie also hosted and associate producers her own nationally televised talk show – Because I So (CityTV/Star), hosted and executive produced her drive time radio show (ProudFM), wrote and starred in the first gay sketch comedy show In Thru The Out Door (Showtime/CBC), created, executive produced, wrote, and starred in a six part series called The Vent (OUTTV), built, programmed and produced a supper club room showing seven live shows a week (The Flying Beaver Pubaret) awarded Top Ten Things to Do When you Go to Toronto by CanadianLiving.com and Top 5 Venues to eat and see a show by BlogTO.
Maggie also co-wrote a book with Lea DeLaria called “Lea’s Book of Rules for the World” which enjoyed multiple print runs.